You can login using your social profile
Install social plugin that has it's own SHORTCODE and add it to Theme Options - Socials - 'Login via Social network' field. We recommend: Wordpress Social Login 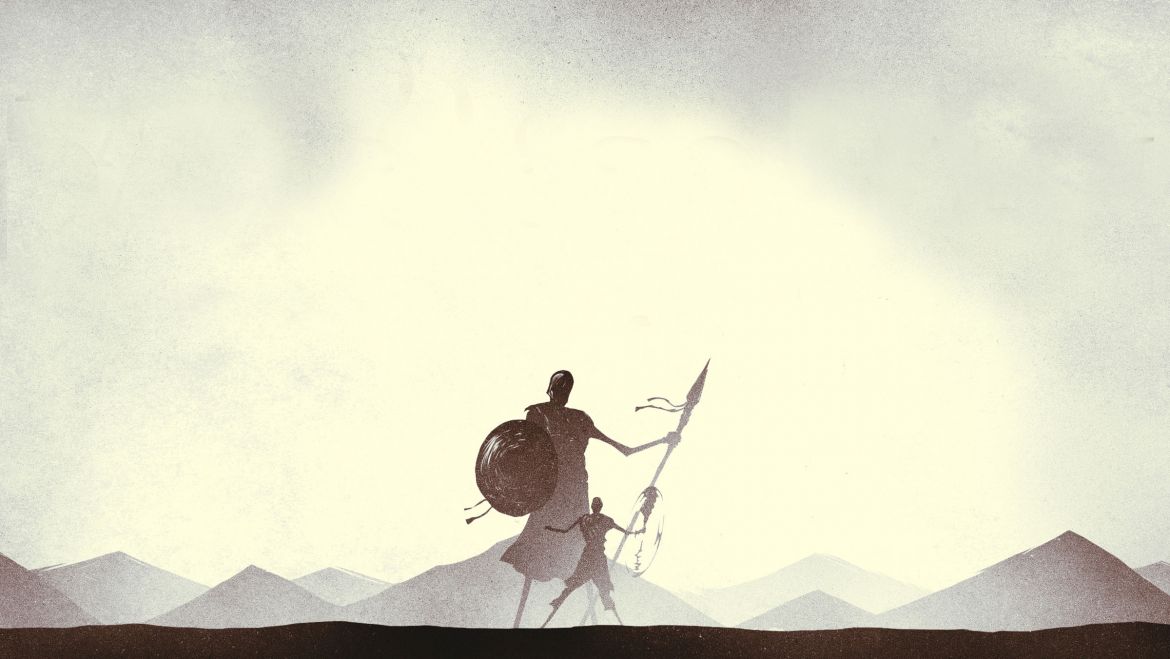 It’s often in the times of our greatest fear and defeat that God reminds us of a truth we may have forgotten and, as it slips into our spirit, it dispels and displaces the long time fears, failures and defeats in our lives within seconds.

Just such a moment happened to me yesterday and I write about it today.

1 Samuel 17:2 “And Saul and the men of Israel were gathered together, and pitched by the valley of Elah, and set the battle in array against the Philistines. “

The scene is a defeated, fearful army lead by somewhat of a military genius and the king of Israel…might I add, the peoples choice but also the acquiescence of God. Anointed but not necessarily the chosen of God. A lesson in itself for another time.

The ground of blessing and victory belongs to you! You own the title deed! When Jesus fulfilled the conditions of the covenant He made with Abraham to bless his seed, you you were in that deal.

What’s interesting in this story in scripture was that the conflict was over a triangular piece of flat land in a valley (I’ve been in a conflict just like that…even the shape of the land was the same). Land and property or real estate has been the cause of many conflicts, wars and the futile loss of multiple lives throughout history. This valley was a strategic and important corridor from the coastal cities, up to the center of the land of Judah and its cities – Bethlehem, Hebron and Jerusalem. The valley of Elah was also the scene of the notorious Biblical battle between young David and the Giant Goliath, one of the classic Biblical drama stories. The children of Israel were spread out in two elevated places to the north of this valley and the Philistines similarly to the south, both able to watch the battle. These vantage points were strongholds of the Kingdom of Judah and had served well in the past to ward off other enemy attacks…but this battle was different. Something had changed. Not so much in the ability and strength or strategy of this mighty army of God, but a change of heart. Courage is an interesting word derived from the Latin and then French word for the heart. God had always wanted to be their king, as He wants to be ours, but Israel had fallen into the terrible trap of comparison and wanted to have a see-and-touch-king, just like all the other nations around them.

It’s in the moments of our fear that an unanchored heart fails and faith seems to diminish giving way to human strategy, prowess and ability. A military strategist of note, king Saul and his entire army find themselves challenged by a single giant, Goliath. The Bible says of Saul he was head and shoulders above the crowd – at least a foot taller than the average man. Born into the tribe of Benjamin of his father Kish. He was also the choice and most handsome man in Israel. From his shoulders up he was taller than any of the people. When courage and the heart changes size usually matters. Literally, it wasn’t so much the physical size of the enemy, it was the size of his threats that drove fear deeper into the hearts of God’s army.

Here’s a lesson for us in this life from the narrative. There is an old adage or axiom which says, “sticks and stones will break my bones, but names will never hurt me”! Pause for a moment, and think about a time in your childhood or even more recently about the words of a parent or spouse or child that haunt you and almost paralyse you. We all know too well that the wounds inflicted by sticks and stones heal far more rapidly than those inflicted in our soul and spirit by negative or nasty words spoken from a heart and mouth filled with fear, bitterness, unforgiveness and anger. These are not just audible words, they can be written in an email or text message or posted on social media.

As I write this article, I have just received a message from my wife telling me the reality of what we owe on a credit card and the minimum monthly payment required. We have had to live off this card over an extended period of time during some challenging times and unemployment. We have cut budgets as well as believed and confessed God’s Word for abundance, faith and prosperity during that time, just in case you were preparing a new sermon for us. My first reaction, as I read the words and began to process them, was a sinking feeling. Here’s what interesting. Up until this point, I’d been having a really great time writing this article and worshiping The LORD. I was in a really good place. It only takes a moment of unbelief to anaesthetise, numb and suck the courage reserve out of a fairly strong heart. But that’s not where it ends. I immediately wrote back to her after making a calculation or two telling her not to fear and that God will provide. That this is an opportunity for us to continue to trust The Lord for His victory over this Goliath.

Well here’s the interesting thing about this story in 1 Samuel 17 about David and Goliath. The valley of Elah rightfully belonged to Judah; they had the title deed. The devil would love to rob us of our rightful inheritance. Now here’s what I want to emphasise. This valley was now being dominated by a giant when in actual fact it belonged to Judah, the southern kingdom. You may or may not know this but most Hebrew names have a meaning. Well, Judah means praise. How this son of Jacob got his name is a great story in itself. Leah, Jacob’s fertile yet not chosen wife (Rachael her sister was the women he chose), is constantly trying to win the love of her husband by giving him children. There are three up until now – Reuben, Simeon and Levi. Each time she longs for his love, affection and acceptance, but when Judah is born, there is a change in her approach and she has a change of heart Gen. 29:35 “Then she became pregnant again and gave birth to a son and SAID, “THIS TIME I WILL PRAISE ADONAI (The Lord)”. For this reason she named him Judah”.

Your valley of The Giant or giants in your life needs to be recognised again as the valley of Judah or Praise. How you do this practically is to know and understand through God’s Word and good biblical teaching what is rightfully yours in Christ. The strategic valley places or anything in your life for that matter which God has promised you is reclaimed by you brushing aside the previous fears and disappointments and like David, defying the giant, enemy and thief of your blessing by declaring the greatness of the person and power of God. That’s what praise is all about – declaring the excellencies of God over and into any situation. If it helps, listen to some anointed worship music, maybe read some scripture, and listen for the voice of God and begin to declare His praises.

THE CHOICE IS YOURS – THE GIANT OR JUDAH?